How to use 360 in conflict resolution

Last week we looked at how 360 can be used to help spot potential in your people. 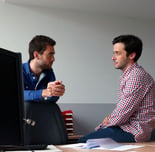 This week we look at the challenging area of how information gleaned from a 360, can help conflict resolution.

It’s a highly sensitive application of 360 and one which needs really careful communication, management and contracting, but it can be really useful.

Approach with caution though!  You'll need to know that the quality of the feedback is dependable and reliable and you can do this by taking a look at the Quality Score provided (if using our Talent 360 tool).

360 is easily the most useful tool when it comes to helping individuals understand the impact they have on others, and how they are perceived.  Psychometrics can go a good way to helping you understand yourself, but only a 360 approach can help you to see yourself as others see you. Again, using our Talent 360, you may have access to what we call the PAPU NANU lens (Positive:Aware, Positive:Unaware, Negative:Aware, Negative:Unaware). It is similar to the JoHari Window, but it focuses on these perceptual differences and uses slightly different axes to sort the information:

Where there is a clash between a line manager and a team member, a 360 can help to uncover whether this is an issue shared with others in the team, or whether it is focused on one individual; intervention may be needed here – if the manager has been accused of bullying or harassment then you want to avoid creating a situation where the ‘whistleblower’ is identifiable by their feedback.  Usually in such cases, though, the manager will know who has raised the issue and it always requires careful and close management.

Whether 360 shows that the problems are centred around one individual (and of course charts which show the range of scores within the group of direct reports are useful here) or whether the problem is experienced by the whole team, this can lead to some really useful (albeit painful) insights for the manager.

A further feature of our Talent 360 system is the allocation of 'eyes’ - useful flags that focus on specific important behaviours.

Following on from any mediation or conflict resolution exercise, it may be useful for the manager to work with a coach or mentor to help him or her identify how to be more effective and deal with conflict more positively and constructively.

Case study:
One public sector clients uses a leadership 360 in cases where a grievance has been raised against a manager, or there has been significant conflict created by difficulties in the relationships between team leader and members.  In these cases, 360 is offered as a way of supporting the manager in understanding how the complaint or conflict has come about and to help them find ways of resolving issues themselves.  Anonymity is really carefully managed and the manager is given lots of support through the process, in-depth feedback and coaching and follow-up.  It has helped to resolve a number of difficult cases; in some instances the manager has realised that the culture of the organisation and the expectations of the managerial role are not for them, and they have moved on or left.  In some cases, they were able to pinpoint specific behavioural areas which they could change, removing the source of conflict with the team.  In all cases, costly and time consuming grievance or disciplinary processes were avoided.

Next week we look at how 360 can help to evaluate the impact of coaching and help coaches develop their own coaching capabilities.

If you'd like to learn more, then please do get in touch.