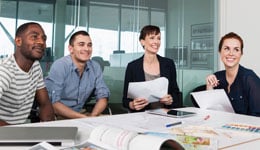 You'll already know that 360 degree feedback has the potential to give employees the insight and focus needed to create their development plan. It can help bed down organisational values and reinforce the competencies needed.

But not attending to the avoidable pitfalls can mean that your 360 never delivers this.

Instead you end up with simply an HR process that is seen as a chore by managers and reviewers, and meaningless and too generalised by employees. And we see this far more than we'd like.

So what can you do to give your 360 the best possible chance of acceptance, value and success?Through out work with organisations large and small as they introduce or refine 360 degree feedback, we see the common misconceptions by HR about what makes for a successful 360: over simplifying; ignoring individual differences when it comes to content and timing; using the wrong language in communications - and so on.

We've translated the common mistakes into a set of 14 specific and positive 'essentials for 360 success' - and it's available now to you below.

But this article can only be a starting point; we have so much more to share and we're happy to do so. So, get in touch if you want to talk about how you can give your 360 a fighting chance in your organisation

But you may simply now need to look at some of the other, more pressing issues around 360 degree feedback software