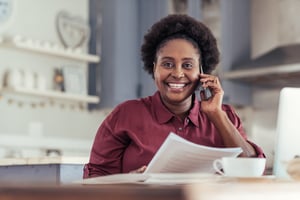 A clear call for much greater flexibility and more access to remote working for all has been issued on the back of this crisis.  Nearly everyone we spoke to said that they expected to be given more personal choice, control and freedom in determining how and when they work from home, and that organisations need to be less hierarchical and elitist when it comes to their remote working policies.

“Companies say that they promote flexible working, or they have policies for it, but the behaviour of managers doesn’t always back this up in practice and reality.  Leaders really need to show they mean it, that it is acceptable – and encouraged - to have periods of working from home” said one senior bank employee.

Managers and HR teams should take a hard look at their policies to ensure that – as far as possible – the policies are equitable and are not unnecessarily restrictive or selective in who is able to take advantage of flexible working arrangements.  “Companies also need to understand that flexibility should be encouraged for everyone, not just those with families and caring duties, but for those with pets or those who want to do a yoga class at 9am”, said an IT specialist.

Much of the investment in infrastructure terms may now have been done; many organisations have offered support to employees by providing equipment and setting them up in a workspace at home with a desk, chair, screen, mouse, or headset for those who were office based.  Companies should now capitalise on that investment and encourage people to continue working remotely when it suits them.  “This has finally blown traditional working methods out of the water.  Presenteeism needs to be consigned to history”, commented one HR professional.  Now that many employees have proved they can make it work, that they can be just as productive when not in the office, this is an opportunity to extend that flexibility.

Of course, it hasn’t worked for everyone, and some have found that their productivity has dropped.  Managers may need to get better at engaging people from a distance, deepen their understanding of work psychology, of how to motivate people in the why, connecting them to their purpose, to colleagues.

Research in the area indicates that women are likely to be more disadvantaged by the Covid19 crisis and its fallout compared to men (e.g., The World Economic Forum, The National Bureau of Economic Research).  In the latter paper, Alon and his colleagues postulate that, whilst this particular economic downturn is likely to have disproportionately affected women, there are potential positive implications for gender equality.  The authors argue that the ‘normalisation’ of flexible, remote working patterns throughout this crisis will result in these practices being more widespread and acceptable and that many fathers have had to take primary or shared responsibility for childcare, which could erode social norms.

Again, it will take sustained effort, considered action and potential policy changes in order to realise these benefits.  In an article by Colleen Ammerman and Boris Groysberg (Harvard Business Review, May 2020), the authors cite their concerns that women’s careers could “become collateral damage” in the aftermath of the global pandemic.  They say that, unless some critical steps are taken and biases managed, organisations could face long-term talent problems in their failure to take advantage of the positive shift in the battle for gender inclusion that could result from the crisis.

In particular they cite the ‘motherhood penalty’ and ‘fatherhood premium’; a bias that means that women are viewed less favourably for having childcare responsibilities whilst for men, being seen in a caregiving role can be a boost for their reputation.  They also

We’ve taken their advice for leaders and HR and expanded it.  These are some key areas of active focus and attention in our bid to ‘come back better’:

It's obviously not just gender that is an issue: we know that there are a number of minority groups and specific demographics that have been more impacted by the Covid crisis than others, whether that be in mortality and infection rates or because they work in sectors or roles that have seen higher rates of furloughing or unemployment.  Coming back better has to mean more inclusivity on all fronts; being more mindful of our biases, greater awareness of how our decisions and behaviour impact on those that work for and with us.  And more proactive, decisive, sustained action at all levels to remove structural inequality from the equation altogether in our new, blended home/work environments.

To help you decide what's important in your organisation, we have developed an Engagement Questionnaire designed specifically to provide you insight as to how employees feel about the return, or continuing as they are, what they really need from their manager and peers, and what they want to abandon.  Ultimately, this will give you a strong steer to your short and medium-term OD priorities.  There are some T&Cs, but we are making no charge to use it.  Why not join those who have already made plans to use it?

We hope you'll join us next week when the focus will be resilience-building and business continuity.

If you have any questions in the meantime do please get in touch.