Is this something you hear from your line managers and other employees when it comes to 360 degree reviews?

You need to reassure them that, if they've been asked to provide some 360 degree feedback by a colleague it’s because their opinion is valued. They're seen as being someone who's in a good position to observe and comment on the other person's behaviours and interactions - and because they're seen as being someone who will provide useful, honest and meaningful feedback.

So what can you do to help those that have to give feedback on others?

Clearly the role that managers, co-workers and direct reports have in 360 reviews is to provide feedback – by giving an insight into the person’s behaviours and performance, their motivations, values, attitudes and emotions, their impact on others and the situation as well as how others perceive them.

As a reviewer it’s really important that they do some basic things - but they may not know where to start.

We’ve created a video for you to help them in this – and, if you’re using our Talent 360® platform, you may already have included this video in the system itself to help your people out. 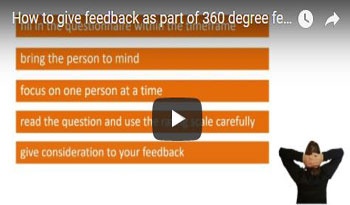 Take a look at the video – and, if you’re ready to invest in improving the 360 feedback your people give, then you may also want to take a look at our other blog post relating to this.