A clear and bold heading

Is your organisation advancing under-represented talent?

Nearly every company today would state that diversity, equity and inclusion (DEI) is a business priority, even during the COVID-19 pandemic. Quite apart from any structural changes to the marketplace and economy, what is clear is that remote working is becoming more of a long term feature of the workplace and that working patterns are likely to remain varied across employees.

Whilst – to an extent – the experiences of 2020 have helped to ‘normalise’ working from home and seen an increased number of men taking responsibility for childcare which could help to erode social norms, there are experts who predict that there are likely to be differential impacts on the careers of different groups, with women potentially being more disadvantaged by the crisis (as reported in recent papers by The World Economic Forum, and The National Bureau of Economic Research).

It will take sustained effort, stronger succession planning and considered action in order to mitigate against women’s careers becoming “collateral damage” in the aftermath of the global pandemic, as suggested in an article by Colleen Ammerman and Boris Groysberg (Harvard Business Review, May 2020). They postulate that, unless some critical steps are taken and biases managed, organisations could face long-term talent problems in their failure to take advantage of the positive shift in the battle for gender inclusion that could result from the crisis. In particular they cite the ‘motherhood penalty’ and ‘fatherhood premium’; a bias that means that women are viewed less favourably for having childcare responsibilities whilst for men, being seen in a caregiving role can be a boost for their reputation and for their chances of advancement.

There are also suggestions that the pandemic could lead to a reversal of the gains made so far with DEI with an increase in racism and prejudice, according to a recent UK study for the Woolf Institute. Physical workspaces are a critical platform for us to interact with, build relationships with and develop a better understanding of other cultures, religions and ethnic backgrounds.  The authors of this report warn that remote working leads to a narrowing of our social involvement, a retreat into more ethnically homogenous interactions, as our engagements focus on family and only the closest of friends. This is expected to have differential impacts on different generations, with some age groups likely to have less varied friendship and family groups than others.

There is plenty of evidence to underline the pre-existing problem. In April 2020, a Gartner survey claimed that 69% of heads of DEI said that they are prioritizing the advancement of underrepresented talent, yet another survey of 113 HR leaders reveals that 88% feel their organisation has not been effective at increasing diverse representation.

In May 2020, calls for racial justice following the killing of George Floyd prompted companies to evaluate diversity and inclusion practices at the urging of employees and the general public. This has been of particular note in the public sector, which had already placed DEI at the centre of people strategies and policy overhauls. The Civil Service union, Prospect, have long been warning that the performance management system across government is discriminatory, with minority ethnic and staff with disabilities being valued less than their other colleagues, receiving disproportionate percentages of the top and bottom performance ratings. Given that the performance management process is often a key contributor of evidence when it comes to determining promotability, it follows that those who are given opportunities to advance to higher levels may not be representative of the workforce, leading to restricted talent pools.

In Europe, we’re being shown the economic contribution and human cost of past practices of slavery and exploitation. Diversity has never been higher in public consciousness and of course as people, we bring this consciousness to our work and view our employers through these lenses.

Much DEI focus has largely been in areas such as talent acquisition, with greater awareness and management of unconscious bias, and on the increasing use of technology. However, this technology is rarely used for senior hires or internal progression, mainly focussing on acquiring new talent from outside the organisation.

If we are to respond meaningfully to DEI, then our focus must be the behaviour of our current leaders and the creation and management of a diverse pipeline of our future leaders. This includes rethinking who will fill executive seats in organisations in the future and taking focused, sustained action at every level in the organisation. Paying lip service to diversity is not enough. Monitoring demographics and reporting diversity data is not enough.

So we are at somewhat of a cross roads – on one hand being driven by the pandemic to physically isolate from each other and digitalisation becoming a substitute for real contact where understanding and diversity can be built and celebrated; on another being challenged to do and demonstrate better diversity in our organisations whilst knowing that we still have some way to go.

Our blind spot in all this is not how diverse our organisations currently are – we’re painfully aware of that right now, but how diversity will change in the future. That’s how we will know if what we are doing will make a difference during and after this pandemic has changed our working patterns and practices for good.

So, ask yourself, ‘Do you know the current Diversity metrics (say Gender) of your current top team?’ Probably a ‘Yes’ (or a ‘wait a minute, yes’). Do you know how that top team could change and what that would mean for your Diversity metrics? That’s a bit more difficult.

More than half of DEI leaders identified influencing succession planning efforts as a top priority, according to a report from Gartner published in January 2020. "But many organisations still struggle with a lack of visible diversity across their leadership teams," Gartner said. As research continues to show that diversity and inclusion helps improve performance and culture, "organisations have realised that a homogeneous succession pipeline poses significant risks to the bottom line," the firm said.

We have responded to these challenges by making it easier to predict how the demographics of your teams might change should you execute your succession plans and develop your talent pipelines.

Using Talent Successor (a module within our SaaS-based Talent Management platform) within a couple of clicks you can compare current diversity metrics to how this will change given the make-up of the successors and talent feeding into key roles, alerting you to areas where increased focus and attention may be needed in order to reach those critical DEI targets.

Here are some options to help you find out more about Talent Successor:

1. Sit back and watch the Talent Successor Video (link below) - 4 minutes 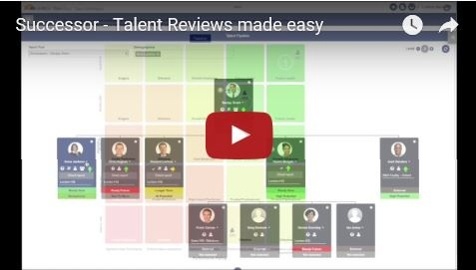 2. Check out this case study from McDonald's - read time 10 minutes

3. Sign-up for our Succession Planning eBook - in sections, each 5 minutes

4. Check out this case Study from HomeServe - read time 10 minutes

5. Contact us for a demo - we'll be as quick as we can in coming back to you!