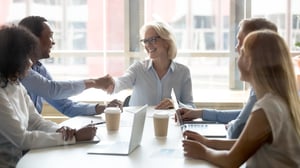 Empowerment and delegation is the final moving part in our organisational machine - that and the not-so-insignificant matter of creating a supportive culture. We've covered a lot in our 6-week series - emotional intelligence, giving good feedback, coaching skills, bringing people together in teams and motivation and engagement. Phew! That's a complex relationship of analogue moving parts. Let's try to bring this all together.

We’ve talked about coaching already, and this is a crucial underpinning skill here.  Through these regular conversations, managers need to be instilling a sense of empowerment and authority – not just giving people a list of things to do.  Ken Charman at uFlexRewards says that a critical mindset shift was to establish a culture of “presumed authority”.

Delays and setbacks in work can become exacerbated when people who are working across time zones and locations have difficulty getting a response from colleagues; in uFlexRewards, Ken made it clear that everyone had presumed authority: the right and responsibility to make a decision if input on that was not forthcoming.  Brave move, perhaps, but one that has reaped benefits.  For an inspiring read on empowering people, Ken recommends It’s Your Ship by US Navy Captain Michael Abrashoff, who turned the fleet’s lowest performing ship into the top performing one in less than 12 months.

A final note – is there a supporting culture?

Something that is often lacking is role modelling from the very top of the organisation; if senior leaders are not themselves holding frequent check-ins, if they do not recognise the value of performance management, if they are not actively, openly inviting feedback themselves and if they don’t create the space for managers to engage in better, more regular conversations about performance, then we hit a bit of a brick wall.

This is one of the key concerns expressed by HR professionals and managers alike, and seems to be a barrier to improving the impact of performance management practices.  Working with the top teams at an early stage, getting commitment to spending time with their own direct reports, aligning reward and recognition systems so they encourage – rather than prohibit – the demonstration of the skills we have listed above are critical to enabling behavioural change at all levels.

We hope you'll tune in but if this is not quite your thing then why not forward it to a colleague who may like a read.

If you have any questions in the meantime do please get in touch.